Brought to you by the National Repertory Orchestra

See the article in the Summit Daily News online 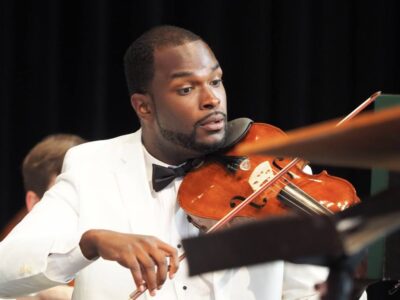 Since 1960, the National Repertory Orchestra has given young professional musicians a competitive edge in winning positions with top orchestras and becoming socially conscious leaders. And this summer, it played an even more important role: The NRO caused many musicians to recommit to their passion and vision of being a professional musician, after long and discouraging pandemic shutdowns.

“After a year and a half of not playing in an orchestra, the NRO has reinvigorated my desire to play in one someday, and I think a lot of people feel that way,” said horn player Austin Ruff, who freelanced in the Dallas Fort Worth metroplex after earning his bachelors of music and science at Southern Methodist University. “A lot of us got very deterred and sad practicing in our apartments, as opposed to playing in a concert hall.”

Julius Adams, principal viola of College-Conservatory of Music in Cincinnati, where he earned his master’s degree in music, felt the same.

“It was eye opening in the sense of realizing this is what I want to do,” Adams said. “I had always felt that way, but the pandemic stunted that. It seemed like an unstable job (market) and political scenario.”

Most musicians teared up at the NRO’s opening concert after being off stage for so long and witnessing the audience’s response.

“You can tell that music really does have a huge impact on them, as well as it does on us,” Adams said.

Strengthening Connection
One aspect of musicianship the NRO fosters is connection. It begins the minute musicians arrive, as community members provide support and act as liaisons.

“They love music, but they’re also here to see you succeed, and they will follow our careers,” said Magalí Toy, a cellist with a masters of music from the Manhattan School of Music; she was born in Guatemala and has citizenship in her native country, as well as the U.S. and Canada. “They’re interested in knowing about us and guiding us.”

Connecting with fellow musicians is also a highlight of the NRO summer. Adams only knew one person before he came, but now he feels like he’s made lifelong friends. And that’s important in the small world of orchestral music: Great music stems from cultivating bonds.

“We all get really close, and I think that closeness is very conducive to great chamber music,” Ruff said.

Violinist Allison Taylor, who is pursuing masters of music degrees in violin, improvisation and chamber music at University of Michigan, was particularly looking forward to playing the Bach Double Violin Concerto with Midori this month. She found the experience “truly life changing.” Midori, who is recognized as one of the most outstanding violinists of our time, taught her how to listen to music and collaborate with other musicians in new ways. 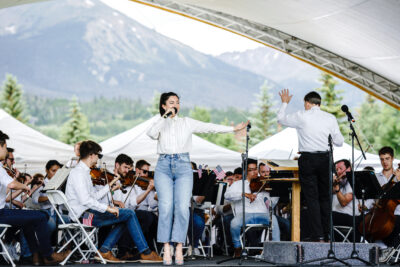 “She taught me how to analyze a piece of music, how to think about the melody in a contextual way to bring out the notes, to tell a story,” Taylor said. “She taught me, by example, how important it is to become the music you’re playing and convey your emotion. The most important aspect of being a performer is connecting with the audience, especially with Western art music and classical music because there are no lyrics – it must be emotional, and it can even be spiritual … in the duet, we fed off each other’s energy and played as if we were one musician. I learned to make spontaneous decisions for inspired and excited performances.”

An Unparalleled Experience
Through its vast — and packed — repertoire, the NRO typically performs about 20 full orchestral concerts and over 40  free, interactive and community-oriented programs.

“The NRO is one of the great American festivals,” Ruff said. “It gives you real-life experience, rather than training you to be in an orchestra someday. It is much more reflective of a professional, full-time symphony schedule. You have to work hard in order to thrive because it’s so much more music, and it’s such a more intense schedule than school.”

The conductors also stand out: NRO music advisor Carl Topilow was the music director for over 40 years.

“When he conducts a masterworks or pops concert, it’s so great to see how the community is ignited from the performance,” Taylor said. “He knows exactly how to get people excited.”

He also brings out the best in musicians, she said, adding that he asked her to sing, in addition to playing violin.

“If I’m doing anything (in the future) like I’m doing here with the NRO, I will be forever grateful and happy,” she said.

She calls NRO music director Michael Stern one of the most talented and inspired conductors she has ever worked with.

“His understanding of music is incomparable,” Taylor said. “He’s incredibly articulate, whether it’s telling stories about conductors or the music itself or the way he wants us to do something musically.”

While some conductors emphasize technique, Stern focuses on how to achieve “a musical understanding that will translate to an audience,” Adams said. NRO musicians come prepared, talented and dedicated, so he just has to say “a few things to make us better,” Toy said.

“We see tangible change pretty much immediately,” Taylor said. “His energy is a fire that ignites every rehearsal.”

“Michael will influence how I interact with my section (in Cincinnati) and in future jobs,” Adams said. “One of the most incredible things was watching how he addresses the orchestra and how he inspires through words. He taught me about doing it for the music and not for oneself.”

The NRO’s masterful conductors, demanding repertoire and emphasis on community and peer connection create a bridge between academic training and polished professional readiness. Tuitions in festivals like the NRO cost thousands of dollars. The fact that NRO’s summer festival is tuition free, made possible through the support of generous donors along with local and nationwide funders, takes pressure off the musicians and allows artists like Adams, who wouldn’t otherwise be able to attend, to benefit.

“I can’t imagine starting my professional career as a violinist without my time here at the NRO,” Taylor said.