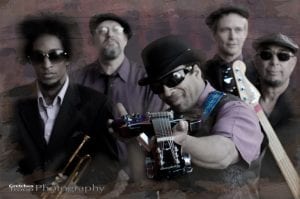 Lionel Young was a part of the National Repertory Orchestra (NRO) from 1986-1988. A classically-trained musician originally from Rochester, New York, Young’s violin training began at the age of six under Anastasia Jempelis at the Eastman School of Music. Since then, he has performed with the Pittsburgh Opera-Ballet orchestra, the 1988 Summer Olympic Music Festival, and of course, the NRO.

During his time in the NRO, musicians were asked to form small groups to perform at events. “I knew they wanted us to form chamber groups, but I took the opportunity to form a blues and bluegrass group,” he said. The group performed at a fundraiser in Denver and was well-received, and the NRO started including him on lots of pops concerts playing bluegrass and old-time fiddle music.

“The NRO gave me a shot at trying to explore different parts of music as well as cover the classical repertoire. It prepares you in a way for a life as an orchestral musician, but it also can prepare you for a life as a musician. You may not end up playing in an orchestra; you may end up teaching, you may end up playing in a blues band, or you may not end up playing. It was a rich experience for me. I owe a lot of gratitude to Carl and the people at the NRO,” he said

After his three years, Young returned to Pittsburgh to sub for the orchestra and opera orchestra for a while, but said, “All of a sudden, some of these players in Colorado said ‘we’d really like to form a band with you.” He took them up on their offer, and the band ended up doing quite well.

“Within about six months of really applying ourselves and trying to make something out of all the energy we had, they named us the best blues band in Denver,” Young said. He has continued with this band and now is the recipient of numerous awards.

Young and his band of five other musicians will perform at Blues & BBQ on Friday, June 7.  Click here for more information!