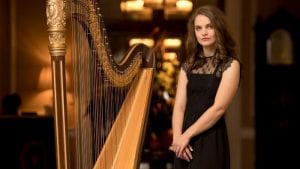 2017 National Repertory Orchestra alumna Rachel Lee Hall recently won first prize at the Houston Symphony’s Ima Hogg Competition. Hall is currently working towards a career in solo and chamber music and is based in Roanoke, Virginia. She teaches harp at Hollands University in Roanoke and performs with Astral Artists, a career-building organization for solo and chamber musicians in Philadelphia, Pennsylvania.

Regarding her time in the NRO, Hall said, “I consider that particular summer probably one of my very favorite summers. I had so many great memories there. I think the orchestral experience was exceptional…it’s really the ideal scenario for learning how to play in an orchestra well.”

Not only was it important for her musically, but Hall also said she met some great friends while in Breckenridge. “I was blown away by the hospitality of the host families and the community,” she said. She shared the story of going on a sunrise hike with a friend and coming back to a dress rehearsal for the Alpine Symphony, saying, “The gorgeous setting of Breckenridge is pretty artistically inspiring.”

Her highlight with the NRO was being able to perform a concerto as the principal harpist. “That was definitely an experience I don’t think I’ll ever forget,” she said, adding that it was an invaluable opportunity for her as a solo musician.

The Ima Hogg Competition is one of the largest multi-instrument competitions in the nation. Hosted by the Houston Symphony, it is open to performers ages 16-26 who don’t currently hold a position in an orchestra. As part of her win, Hall is invited back for a performance with the symphony in the first week of July as well as a week-long residency in which she will play at a donor’s recital and work with the local school system. She has also received $25,000, which she said she will use to pay off loans and build her career.

Hall said winning this competition is a next step in achieving her dream of being a professional harp soloist, but it also has great personal significance for her. Yolanda Kondonassis, her harp teacher and a fellow NRO alumna, also won the Ima Hogg when she was about the same age. Hall is honored to continue in this legacy.

To get in touch or learn more, visit http://www.rachelleehall.com/.