Conductor and cellist Walter Charles founded the Blue Jeans Symphony in Estes Park, Colorado, in 1960. Charles, (born Wladislaw Charles Piasecki) was a student at the David Mannes School of Music and Julliard. While at Julliard, he was chosen to be assistant conductor and first cellist in Leopold Stokowski’s All American Youth Orchestra.  Mr. Stokowski complained that Walter had “no professional experience.” As a result, Walter began to think about how a young musician could acquire professional experience if no orchestra would hire him without it.

As his career developed, he became more convinced of the need to provide experience for young musicians between the ages of 18 and 26.  While vacationing at Rocky Mountain National Park, he was “inspired by the idea that Estes Park was the perfect place to implement his plan of an intensive training orchestra at a summer music camp.”

In 1942, Charles interrupted his studies at Julliard to enter the United States Air Corps where he earned the triple-rating of bombardier-navigator-pilot. He flew 50 missions over North Africa receiving the Presidential Citation and the Air Medal with nine oak leaf clusters. But, even in the midst of World War II, Charles found a way to play the cello. While accompanying the body of a fallen friend to Constantinople for burial, he found a “pretty good cello” in a small music shop which he bought for five dollars, USD.  He persuaded his truck driver to sneak the cello into the back of his truck.  On days between missions, he would head off to a distant field and play music.  When his secret was discovered by his fellow officers, he was convinced to perform little recitals to keep his cello under the radar. He returned from the war to finish his music studies at Julliard in 1946. 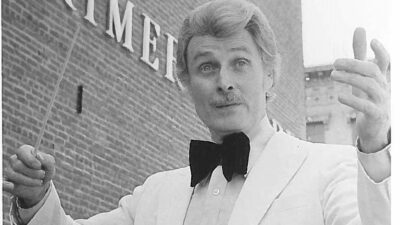 In 1960, Charles founded the Blue Jeans Symphony Orchestra on two themes. The first was to fill the gap between academic musical training and the competitive world of the professional musician with a six-week exposure to massive doses of classic repertoire, rehearsals and concerts. The second theme emphasized the informal blue jeans image of blue-collar working people playing and enjoying classical music. Underlying these themes was the belief that “to be a fine artist, a musician must have character, and working with your hands develops character,” Mr. Charles said. All musicians had to agree to pay their living expenses by working at local businesses whether they needed the money or not.

The orchestra performed their concerts in blue jeans, and Charles conducted in a denim white tie and tails especially made for him by Levi-Strauss. In 1961 and 1962 the Rotary Club of Estes Park supported the orchestra financially in recognition of its service to youth and the benefit surrounding the community.  The Blue Jeans Symphony incorporated as a non-profit organization and began attracting musicians from leading U.S. schools.

History and Photo Credits: Blue Jeans to Breckenridge, A History of the National Repertory Orchestra by Janice Ward Parrish