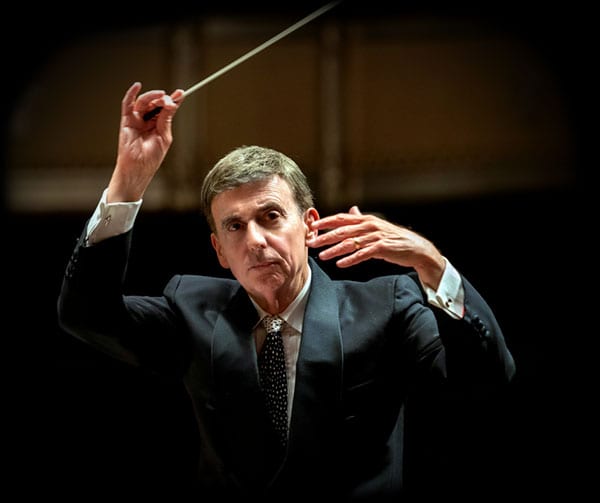 The Art of Auditioning – SEMINAR FULL

When it comes to the skill of earning that top spot and finding a competitive edge, Carl Topilow is one of the most valuable resources. The session includes a constructive review of video samples with time for questions and answers.

Carl Topilow is renowned worldwide for his versatility, whether he is holding a conductor’s baton or his trademark red clarinet. He is a multi-talented virtuoso who is equally at home in classical and popular music both as conductor and instrumentalist. Carl’s pops performances blend the music of Broadway and Hollywood, as well as popular music, light classics and jazz, often finding an occasion to include a number on his array of brightly colored clarinets. His unique approach to pops programming includes extensive audience involvement and true showmanship.
Following his longtime dream of conducting his own pops orchestra, Carl founded the Cleveland Pops Orchestra. The orchestra, currently in its 24th season, plays its subscription series in Severance Hall and performs in several other locations throughout Ohio. The Cleveland Pops Orchestra’s diverse, innovative and electrifying programs have been critically acclaimed. The orchestra has three CDs, Music to Grow On, an exciting collection of music for children and adults of all ages, Live at the Pops, a stirring compilation of music taken from live performances, and a 20th anniversary CD, which includes a selection of live performances taken from concerts over a span from the past decade.
Carl is Music Director and Conductor of the National Repertory Orchestra, a summer music festival based in beautiful Breckenridge, Colorado. He has assisted in the training of talented young musicians and conductors for positions in symphonic orchestras in the United States and abroad.
In 2008, Carl was appointed Music Director and Conductor of the the Firelands Symphony Orchestra, based in Sandusky, OH. During Topilow’s tenure with the orchestra, the number of subscriptions has increased from 56 to 550. Featured soloists have included pianists Sergei Babayan, Antonio Pompa-Baldi, and Daniil Trifonov, violinists Danielle Belen, Andres Cardenes, Jaime Laredo, Kurt Nikkanen, cellist Sharon Robinson, guitarist Jason Vieaux, trumpeters Michael Sachs and Alan Siebert, and winners of the Sphinx Competition and Cleveland International Piano Competition.
Carl served as Conductor and Director of the Orchestral Program at the Cleveland Institute of Music for 37 years. Graduates of his masters program in orchestral conducting can be found as maestros with several leading orchestras. He was named Faculty Emeritus after his years of service at CIM.
Carl has also served as Principal Pops Conductor for the Southwest Florida Symphony Orchestra in Ft. Myers, Florida, the Toledo Symphony Orchestra, and the Mansfield (OH) Symphony Orchestra.
As a guest conductor, Carl has appeared around the world with more than 120 orchestras, in 37 states in the USA, as well as orchestras in Canada, China, Czech Republic, England, France, Germany, Italy, Korea, Mexico, Spain, Switzerland and Venezuela.
In addition to his busy conducting schedule, Carl avidly pursues his passion for performing as clarinetist. He often performs with his brother Arthur, a pianist, and the duo can be heard on three CDs: Come in from the Cold, A View from the Top, and Music of America.
Carl is a graduate of the Manhattan School of Music, with a degree in clarinet performance and a masters degree in music education. He has held conducting fellowships with the National Orchestral Association with Leon Barzin and the Aspen Music Festival with under Jorge Mester. Carl began his professional career as Exxon Arts Endowment Conductor of the Denver Symphony Orchestra.
Topilow’s wife Shirley is President and CEO of the Cleveland Pops Orchestra. Their daughter, Emily, attends Bowling Green State University where she is majoring in psychology and is a violinist with the university orchestra. Their daughter, Jenny, a graduate of the Cleveland Institute of Music and Carnegie Mellon University, is a violinist with the Charlotte Symphony Orchestra.
Graduates of Carl Topilow’s masters program in orchestral conducting at the Cleveland Institute of Music hold or have held positions with these orchestras and others: Annapolis Symphony, Arkansas Symphony, Boise Philharmonic, Boston Symphony, Cleveland Orchestra, Cincinnati Symphony, Edmonton Symphony Orchestra, Indianapolis Symphony, Kansas City Symphony, Orchestra of Limoges (France), Louisville Orchestra, Orquestra Sinfonica de Minas Gerais (Brazil), Ohio Light Opera, Richmond Symphony, US Army Band “Pershing’s Own.”