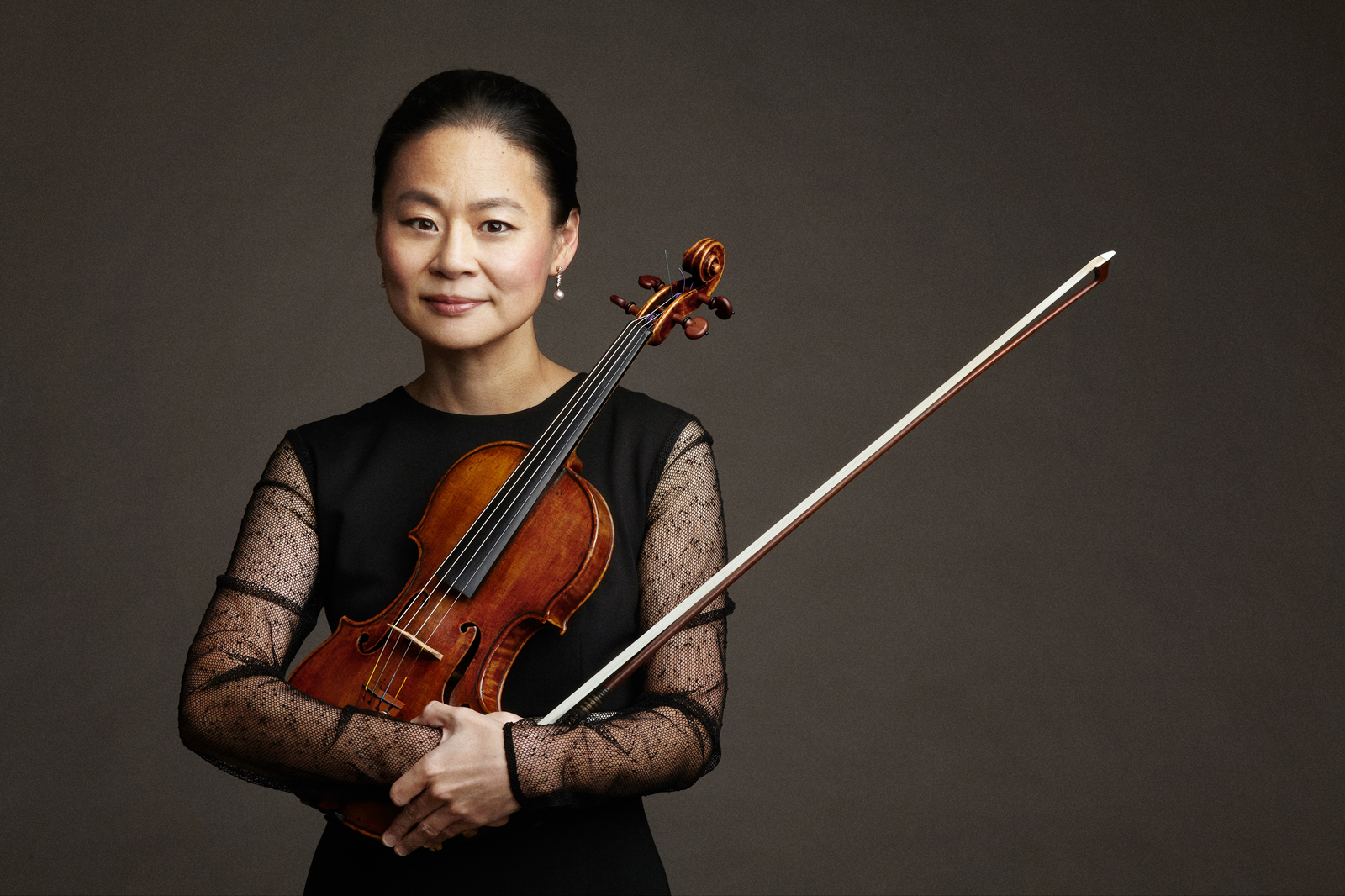 In memory of Michael Altenberg

Spring Cadenzas was commissioned for Midori and her Orchestra Residencies Program (ORP) by Yoko Makino, in memory of her mother, Reiko.

Beyond the Program with Michael Stern

My inspiration for this program was rivers. Smetana’s much-loved The Moldau is from his collection Má Vlast, the second of six tone poems that all tell of his Bohemian homeland. Specifically celebrating the Vltava River, Errollyn Wallen’s Mighty River is not about a place but rather a symbolism. Her concept moved me: “It is an innate human instinct to be free, just as it is a law of nature that the river should rush headlong to the sea.” She remembers her ancestors, their struggles against the oppression of slavery, and the inexorable yearning of all people for freedom.

As I thought of how the same idea of motion in the water and the ancient symbolism of what rivers have meant to our human civilization can profoundly influence two very different composers whose musical sensibilities are a century and a half apart, I also thought of the bridges that connect us. Richard Wagner clearly was the conduit to an entirely new and modern rethinking of what music would be as the 19th century progressed. No composer who came after him was not affected or influenced in one way or another by his work, and the contrapuntal virtuosity and complexity in Die Meistersinger – “The Master Singers” – is thrilling.

Gabriel Fauré was also a bridge, helping to morph the French musical vernacular at the end of the 19th century into what would be an utterly new breath of Impressionism in the next century. Adding immeasurably to this mix is Midori, a great violinist and a longtime and dear friend who comes to NRO for the first time. We asked her to play a solo concerto on this program. She replied that she would prefer to play with our NRO colleagues more collaboratively and suggested Bach’s iconic Double Concerto. How wonderful to have Allison Taylor and Midori playing together, and how lucky we are. The constant search of the forward flow of rivers, the linking of experience and insight through bridges – this sums up Midori. I know no great musician more mindful or generous than she.

Belize-born British composer Errollyn Wallen, MBE, is known for writing in a wide array of musical styles and genres, from pop to opera. Mighty River was commissioned and premiered in 2007, for a concert commemorating the Bicentenary of the Abolition of the Slave Trade Act passed by British Parliament on March 25th, 1807. The work puts all of Wallen’s musical versatility on display, incorporating fragments of spirituals (Amazing Grace, Deep River, and Go Down Moses among them) into contemporary classical techniques, crafting an episodic structure dotted with instrumental solos.

About Mighty River, Errolyn Wallen has written this:

“Composing for the orchestra is my favourite challenge [and this] work is an especially important one for me. It is an innate human instinct to be free, just as it is a law of nature that the river should rush headlong to the sea. That is the concept behind Mighty River.

“Slavery claimed the lives of countless people, but somehow my ancestors found the grit and determination to persist in spite of the conditions in which they found themselves. I dedicate Mighty River to my great-great-great-great-great-great grandmother. Though I never knew her, I am driven on by her courage in the face of dreadful odds and am inspired by her example not merely to survive, but to thrive.”

In fall 2020, Midori contacted me about writing a concerto that she could perform remotely with youth orchestras, and also live, in subsequent seasons. During the winter of the pandemic, it felt uplifting to compose music imbued with hope and energy. The piece takes the form of interlocking cadenzas, played without pause, in which Midori leads the orchestra through a series of musical episodes. The movement titles are derived from translations of Basho’s delicate, poignant haikus.

Spring Cadenzas was commissioned for Midori by Yoko Makino, in memory of her mother, Reiko.

Of the 1000+ compositions by J.S. Bach that we know of, only a relatively small part are purely instrumental. The reason for this is practical: he was employed primarily as a church musician in protestant Germany, when the focus was on vocal settings of sacred texts. The only time in his life when this was not the case was during a relatively brief stint (1718-23) as court composer for Prince Leopold of Köthen, a city in the modern-day German state of Anhalt-Saxony. Since the court there was Calvinist, a denomination which eschewed elaborate liturgical music, Bach was free for once to focus on secular music, and thus this was the period in which he likely composed the concerto for two violins in d minor. The three-movement work is a standout, finding its way onto programs which have nothing otherwise to do with Baroque forms and genres. In part this is due to the fascinating way Bach handled the two solo violin lines, which intertwine in ever-shifting patterns. Despite this abundant surface complexity, there is a directness of expression here, particularly in the vulnerable, aching middle movement.

The citizens of Prague had always enjoyed a lively music scene; in the 1780s and early 90s they enjoyed several visits from Mozart, who appreciated its cultured audiences so much he considered moving there himself. But the road to a repertory of Czech nationalist music was long, and it led through Bedřich Smetana. A society for the advancement of Bohemian music was set up in 1806, and five years later the Prague Conservatory was opened. By the time Smetana moved to the city in 1839, though, progress had stalled a bit. He struggled to make his way as a composer of dance music and salon pieces, and in 1848 opened a music institute of his own, which buoyed his situation. But continued frustration eventually led him to take a position in Gothenburg, Sweden for half a decade, before finally returning in 1862.

Things were now moving ahead more swiftly for Czech music. A rich nobleman mounted a competition for the two best native-language operas: one comic and one serious. Smetana put himself to the task and, after two years of work, made his submission anonymously. Three years of deliberation were required before he was pronounced the winner. In the intervening time, a Provisional Theater for the production of national opera and drama was established, and Smetana became its chief conductor in 1866. He immediately offered a new work for its stage, a comedy entitled The Bartered Bride. It was to become his most popular, and, after several revisions, the first Czech opera to be performed abroad.

He assumed the title of Artistic Director of the National Theater in 1872, but his time in the position he had spent a lifetime pursuing would be all too brief. He lost his hearing in October 1874 and was obliged to relinquish his post at the theatre. He and his family moved in with his eldest daughter, who had married a forester. Their woodland home was a refuge for the composer, and he wasted no time refocusing his attention from conducting to composition. The last decade of his life was extremely prolific, included one of the great achievements of his career: Ma Vlast (My Homeland), a cycle of six symphonic tone poems, each a tableau relating to Czech mythology, history, and geography. Vltava—The Moldau—is the second in the set. From the opening, undulating flute lines, the motion of the great river is apparent. In Smetana’s words:

“The work depicts the course of the river Vltava [Moldau] beginning from the two small sources, the cold and warm Vltava, the joining of both streams into one, then the flow of the Vltava through forests and across meadows, through the countryside where gay festivals are just being celebrated; by the light of the moon a dance of water nymphs; on the nearby cliffs proud castles, mansions and ruins rise up; the Vltava swirls in the St. John’s rapids, flows in a broad stream as far as Prague, the Vysehrad [castle] appears, and finally the river disappears in the distance as it flows majestivally into the Elbe.”

Gabriel Fauré spent eleven of his formative years as a boarding student at a school for religious music in Paris, graduating at age twenty. Much of his early career was spent in various church jobs as he sought to start a family and refine his personal compositional style. He was awarded a teaching position at the Conservatoire in the Fall of 1896, at the age of fifty-one, and would become its director in 1905. In the last decade of the nineteenth century, he made many important connections in England, one of which led to the commission to write incidental music for a production of the Maeterlinck play Pelléas and Mélisande. The present-day suite, Fauré’s symphonic masterpiece, comprises three selections from the original score plus the addition of a Sicilienne which was composed much earlier for an unrelated play. For the first movement of the suite Fauré has chosen the prelude to the opening of act I—that is, the curtain-raiser for the whole play. Just following the emotional climax of the movement, we hear a hunting-horn presaging the arrival of the protagonist. La Flileuse depicts young Mélisande at her spinning wheel, basking in the attentions of handsome Pelléas. Despite its interloper status, one admires Fauré’s inclusion of the following Sicilienne; it seamlessly inhabits the same imaginary world, and sports an absolute earworm of a tune to boot. The final movement, Mort de Mélisande, “Death of Mélisande”, steers clear of breast-beating melodrama in favor of quiet gravity.

Richard Wagner, that demigod of opera, had a long stretch of very bad luck. Because of his involvement with the rebels against the Kingdom of Saxony during the May Uprising in Dresden in 1849, he was exiled from his home country of Germany, taking refuge in Switzerland; his marriage was a mess; he was on the run from creditors everywhere; and an opera project in Paris folded after only three performances. But then, two strokes of good fortune materialized. Germany lifted the ban on him in 1862, so he resettled in a small town on the Rhine. And in 1864, King Ludwig II, an eighteen-year-old Wagner fanatic, succeeded to the Bavarian throne. He immediately reached out to Wagner with an offer of patronage and poof! went Wagner’s financial troubles. Now anything he dreamed of could be achieved. In 1867 he finally completed Die Meistersinger von Nürnberg, which he had begun more than twenty years prior.

To win the hand of his beloved Eva, Walther, the protagonist of Die Meistersinger, must defeat Nuremburg’s guild of Meistersingers (master singers) in a test of vocal prowess. The plot of this comic opera is at least loosely based on historical fact since there were strictly regulated guilds of Meistersingers in city-states like Nuremburg during the Renaissance. The conflict between the impassioned young Walther and the strictly authoritarian guild is not only a parable about tempering inspiration with the guiding principles of form, but also an affirmation of the power and necessity of art.

The prelude, or overture, opens with a bright and virile theme tinged with the possibility of self-importance. Wagner interposes Walther’s totally contrasting, palpitating love theme (given by the flute) before launching into a pair of themes representing the proud traditions of the guild. The first is a fanfare-like gesture marching regally through the orchestra; the second is a soaring line that seems to spiral ever heavenward before coming to half-repose in the central portion of the prelude. Another of Walther’s themes, offbeat and directionless but alive with romantic yearning, is heard. In the climax of the work these themes are all combined in a display of fantastic contrapuntal mastery, symbolizing the reconciliation of Walther’s inspired creativity with the governing restraint of formal tradition.

In recognition and gratitude of this evening’s concert underwriters: