Michael Stern and Kansas City have been hailed for their remarkable artistic ascent, original programming, organizational development and stability, and the extraordinary growth of its varied audiences since his tenure began. Stern and the orchestra have partnered with Grammy® Award-winning Reference Recordings for a series of very well-received CDs, including a new recording of works by American composer Adam Schoenberg, Gustav Holst’s “The Planets,” and albums of Elgar, Sibelius, and Saint-Saens.

Iris Orchestra in Germantown, Tennessee is known for the virtuosity of its playing, and the depth and variety of its programming, with special emphasis on American contemporary music. Under Stern’s direction, IRIS has commissioned and premiered works by William Bolcom, Chris Brubeck, Richard Danielpour, Stephen Hartke, Edgar Meyer, Jonathan Leshnoff, Ned Rorem, Huang Ruo, amongst others, and has released recordings on the Naxos and Arabesque labels.

Recent guest engagements have included the Boston Symphony at Tanglewood, the Chicago Symphony at Ravinia, the Atlanta Symphony, the Minnesota Orchestra, the New York Philharmonic in the film score to The Red Violin with Joshua Bell as soloist; also, with the Philadelphia Orchestra at the Saratoga Performing Arts Center, the National Arts Centre in Ottawa, Ravinia, and the Napa Valley Festival del Sole, as well as concerts at the Stern Violin Competition in Shanghai.

Annually he conducts the Guangzhou Symphony Orchestra annually as part of the Youth Music Culture Guangdong with Yo-Yo Ma and the National Repertory Orchestra and regularly appears at the Aspen Music Festival and School. 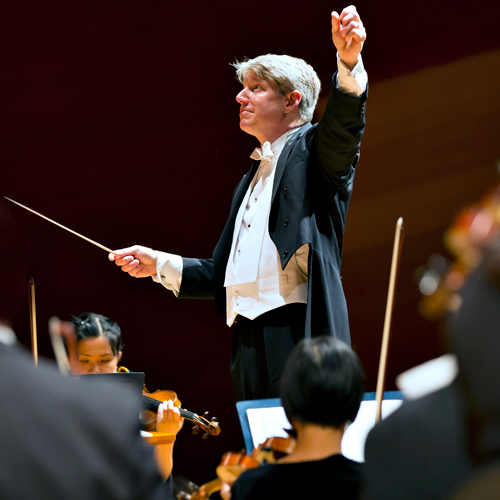